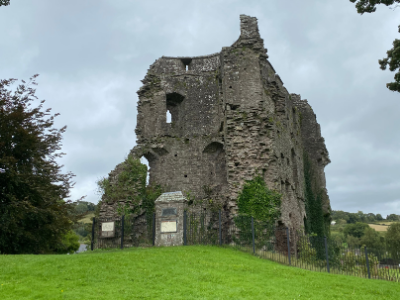 What is the most spectacular way to lose your Castle? In the first place, having an affair with the King’s wife and secondly, becoming too powerful for your own good.   Which is exactly what Roger Mortimer did. And which is why he lost Crickhowell Castle (and his head!).

I wanted to find out more about Crickhowell Castle and Roger Mortimer, so on a sunny September afternoon, we slowly drove into the town of Crickhowell.  The town lies on the River Usk on the southern edge of the Black Mountains and in the Eastern part of the Brecon Beacons National Park, so the area is certainly easy on the eye.

The town is very walkable – narrow streets with cute shops and cafes.  We found a parking space near the town’s Visitor Centre and walked the short distance to Crickhowell Castle, situated along the aptly named Castle Road.  To be fair, there is not that much of the Castle left to see – the Welsh saw to that in 1403.  But I’m getting ahead of the Castle’s story.

The Normans Come to Town 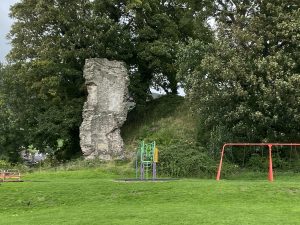 The Remains of the Gatehouse at Crickhowell Castle

Shortly after the Norman invasion of the area, the Tuberville family, a powerful Norman family, built the first Castle at Crickhowell.  This was merely a motte and bailey, timber-built structure.

The Castle remained in the family until Hugh Tuberville died in 1293.  He left no male heir.  Crickhowell went to his daughter Sybil, who married Sir Grimbald Paucefote.  The Paucefote family now owned and ran the Castle and Sir Grimbald made quick work of rebuilding it in stone.  The base of the motte and bailey was walled and provided with towers and gateways and crowned with a stone shell Keep.  By 1272, Crickhowell Castle was a solid, fortified structure.

The Rise of Roger Mortimer

Roger was an English nobleman who was very much in favour at the Royal Court.  He married the wealthy heiress Joan de Geneville, thereby gaining many estates.  But he was also a very capable military commander and politician.  It is this that made him powerful.  He held the titles of 3rd Baron Mortimer, 1st Earl of March and Lord Lieutenant of Ireland.

Crickhowell Castle, amongst other lands and estates, were granted to him as his star rose in England and Wales.

But maybe power went to his head.  He revolted against King Edward II and was imprisoned in the Tower of London in 1322.  But Roger is a man who doesn’t give up.  He escaped with the help of the prison warden, Gerard Alisby and fled to France.  And this is wher 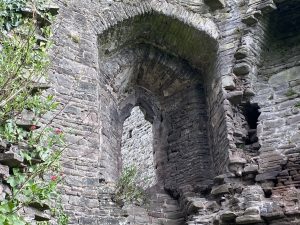 e the story becomes even more interesting.  Isabella, King Edward II’s wife, also went to France at this time.  To add insult to injury, Roger started an affair with Isabella which clearly enraged the King.

But, like I mentioned earlier, Roger is not a man to easily give up.  He organised an invasion of England and managed to depose King Edward II.  Roger and Isabella ruled the country with her son (Edward III) as a “puppet king”.  He even had the former King Edward II killed in 1327 (although there is a school of thought that believes Edward II survived).

Drunk on power, Roger ruled with an iron fist for three years.

But it wasn’t to last.  Edward III matured and decided to take back the control of the country that was rightly his.  He had Mortimer executed by hanging at Tyburn in November 1330.

After the execution of Mortimer, Crickhowell Castle reverted to Sir John Pauncefote.  He re-fortified the Castle under Royal orders, as the Welsh were showing signs of revolt again.  But the effort was in vain.  In 1403, Crickhowell Castle was attacked by Owain Glyndwr and reduced to ruins.

During the reign of Elizabeth I, the structure was declared uninhabitable.

After the First World War, the site was donated by Cwilym C. James Esq. J.P. OBE in memory of his son Lieut. C.B.H. James, who died in the war, to the town.  A playground and park now surround the ruins of the Crickhowell Castle.

The Ruins of Crickhowell Castle

We walked up the little path, through the park and past the playground.  To the right is one fragment of the Castle.  Dead ahead is another, smaller part. 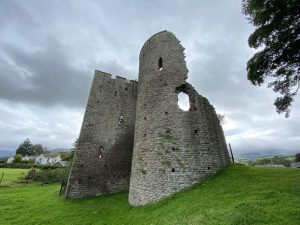 Ruins of a Tower in the South-East Corner

The one to the south-east of the motte was a strong double tower.  One side of this survives to a considerable height. More ruinous is the gatehouse to the south-west (dead ahead of the path) of the motte. This originally consisted of a pair of drum-towers, one of which remains to a reasonable height, while the other is reduced virtually to ground level.

An information board on site has a drawing of what the Castle would have looked like in 1350.  Imposing, dramatic and powerful.  But none of that is still there.  Now, sadly, one can only explore a pitiful bit of ruins.  Crickhowell Castle’s power is gone, just like that of Roger Mortimer.