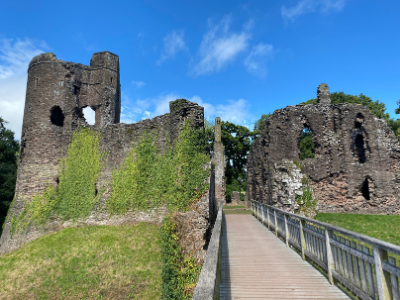 It was very hot as we drove into the little village of Grosmont.  Where IS the castle?  There are no signposts we could find.  But the village is small, so we decided to park on the main road (near the pub) and walk around, scouting for the castle.

Everything seemed to be closed up, including the pub (and a cold beer would have gone down really well in this heat!).  But we spotted a Post Office sign and that looked open.  The friendly gentleman in the Post Office pointed to a tiny sign opposite the road, on the wall.  “Castle” it said, with a little arrow pointing up a narrow alley.  Aha!  Now we knew where we were going 😉

And there it is – at the end of the alley – the magnificent Grosmont Castle of Wales.  Vivid green grass covers the slight upward slope to the wooden bridge.  Blue skies all around.  And the mighty castle structure right there, in front of us.  It is awesome!

Though quite ruinous, the castle still invokes a sense of power and majesty.  One can almost see the soldiers in a bygone age, running along the wall walk and horse-drawn carts entering the massive gate.  Here, I feel as if I am standing inside history. 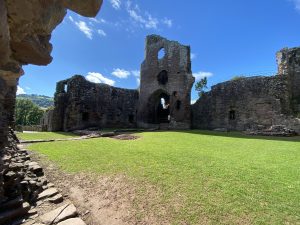 Immediately to our left, as we entered the castle via the Gatehouse, is a high tower.  This is a three-storey structure from the 14th century which was used as a suite of rooms by the then-lord.  Stone steps inside leads up to a short bit of remaining Wall Walk.  From here, the views are spectacular.

Very little remains of the West and North Towers, but one can still clearly see how the Castle was laid out.  The curtain walls are mostly intact and on the East side, the ruins of the Hall Block still paint a vivid picture of what it looked like in the Middle Ages.  The Hall is huge (96 by 32 feet) and two storeys high.

The crumbling gatehouse used to be two storeys high, but little can still be seen today of its original splendour.

A Brief History of Grosmont Castle

Grosmont was one of three Castles built in the Monnow Valley after the Norman Conquest.  These fortifications had the aim of controlling the border and suppressing the Welsh.  At this time, Grosmont was a timber structure protected by a ditch. 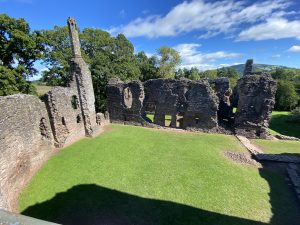 In 1135, a major Welsh revolt took place.  King Stephen decided to restructure the landholdings along this part of the border.  He brought Grosmont Castle and her sister Castles (Skenfrith and White Castles) back under the control of the Crown.

Conflict with the Welsh continued (Abergavenny Castle being attacked in 1182).  The Crown readied Grosmont for potential Welsh attack and over the next three years upgraded the timber fortifications.

In 1201, King John gave the “Three Castles” to Hubert de Burgh who immediately started upgrading the Castles.  Starting with Grosmont, Hubert rebuilt the Hall Block in stone.  Sadly, Hubert was captured fighting in France in 1205 so King John reclaimed the castles and gave all three to William de Braose.  But medieval politics are fickle.  By 1207, William was out of favour and lost the castles back to the Crown.

This to-ing and fro-ing continued, with Hubert regaining the Three Castles (in 1219) and continuing the rebuilding project, before losing it again in 1232.  By 1234, Hubert was back in favour and regained the Castles.  But (of course, you guessed it!), by 1239 he lost Grosmont again and the Castle was given to Walerund who completed the building work.

In 1254, Grosmont Castle and her sister fortifications were granted to King Henry’s eldest son and later king, Edward.  In 1262, Grosmont was again readied for a potential Welsh attack but this never materialised.

The Earl of Lancaster was given the Three Castles in 1267.  This family held Grosmont for many centuries.  It was the Lancasters who modernised Grosmont in the first half of the 14th century to create the suite of rooms in the South-West Tower.

Grosmont Castle’s last military role was at the start of the 15th century, during the revolt of Owain Glyndwr.  The English were victorious during this entire episode.  By 1538, Grosmont Castle had fallen into disuse and later, into ruin.