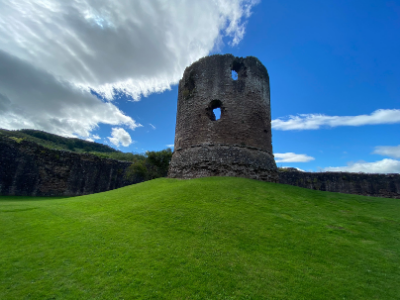 Having visited both White Castle and Grosmont Castle in Monmouthshire, Wales earlier in the day, we decided to set off on the B4521 road towards Skenfrith.  Skenfrith is the third castle in the “Three Castle” series in this area and I desperately wanted to explore all three.

Skenfrith Castle in Wales sits right next to the Monnow River, on the edge of the village.  It a very low laying for a castle!  Usually, castles are located high up on rocky outcrops with views stretching far and wide.  Skenfrith is different.  And I found this rather puzzling.

In medieval times, the River Monnow was much deeper and used to transport goods around the area. Skenfrith developed as a village because this was an important river crossing.  And the English border is only a few miles away.

Taking all of this into account, is becomes clear why this exact location was chosen for the construction of a castle.  So, even though a castle here would have no elevation, all the other factors made it essential to have a fortified structure here. 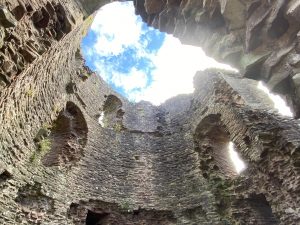 Inside the Keep at Skenfrith Castle

An earth and timber castle was built at Skenfrith, shortly after the Norman invasion.  It formed part of a triangle of fortifications in the Monnow valley, to protect the route from Wales to Hereford.

After the major Welsh revolt of 1135, King Stephen restructured the landholdings in the area.  He created a new lordship known as the “Three Castles” which included Skenfrith Castle, White Castle and Grosmont Castle.  He also kept this new lordship under the control of the Crown to ensure his stronghold in South Wales.

The Welsh however remained troublesome.  Through-out the 1160’s and 1170’s the Mortimer and de Braose Marcher families were in conflict with their Welsh rivals.  In 1182, the Welsh attacked nearby Abergavenny Castle which led directly to the other castles in the area being upgraded and made ready for war.

Skenfrith Castle received £43 worth of upgrading in 1186 with further work carried out in 1190.  It is believed that the stone Keep, and curtain wall were built during this time.

The Rebuilding of Skenfrith Castle 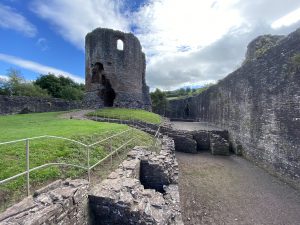 The Hall Range at Skenfrith Castle

In 1201, King John gave the Three Castles to Hubert de Burgh, who was a close friend and supporter of the king.  The latter immediately started a rebuilding programme, starting at Grosmont Castle.  However, before works could even start at Skenfrith, Hubert was captured while fighting in France.

King John reclaimed the Three Castles and promptly gave it to Hubert’s rival, William de Braose (zero loyalty!).  After a fallout between the king and William, the castles were taken back into Crown hands in 1207.  Further disputes led to the castles being retaken by William’s son (also called William) during the First Baron’s War.  However, by 1219, Hubert was released from captivity and regained his status (being made Earl of Kent) and regained the Three Castles.

It was at this time that Hubert completely rebuilt Skenfrith Castle.  He levelled the old castle and built a new rectangular castle with round towers and a large circular Keep.  What we can still see today, are the ruins of Hubert’s building works.

In 1232, Hubert again fell from power and was stripped of the castles.  The Three Castles were then placed under the command of Walerund Teutonicus, a loyal servant of the king.  Over the next few years, Skenfrith Castle, along with her sister castles, changed hands regularly.

In 1244, the castle was again under command of Walerund, who then built a new chapel and repaired the Keep’s roof.  In 1254, the castles were granted to King Henry’s son, Prince Edward (who later became king).

Finally, some stability of ownership came to Skenfrith in 1267, when it was given to the Earl of Lancaster.  Skenfrith was held by this earldom (later duchy) for many centuries.

King Edward I finally conquered Wales and in 1282, Skenfrith was no longer used in any military capacity, though it remained as an administrative centre.

By 1538, the castle had fallen into disuse and finally (sadly) into ruin.  A survey in 1613 described Skenfrith as “ruinous and decayed”.

In 1825, the Three Castles were sold to Henry Somerset, the Duke of Beaufort.  Later, it changed hands to Harold Sands, who carried out some conservation work.  He gave it to the National Trust in 1936, who started extensive repair work.

Skenfrith Castle in Wales is now being managed by Cadw and is a listed Grade II building. 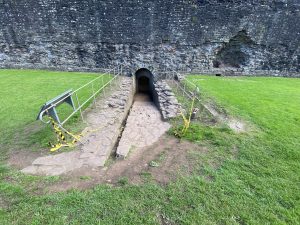 The four sides of Skenfrith castle measures around 80m, 60m, 60m and 40m respectively and survives to a height of up to 5 meters.  The moat around the castle is now filled with soil and grassed over.

Three of the original corner towers still survive and the North-West tower is mostly reduced to its foundations.  The Hall Range foundations can also still be seen on the South-Western side.

The circular Keep in the middle of the castle is still the most impressive part of the structure.  It is 12 meters high and 10 meters across.  The second-floor chamber was fitted with windows and a large fireplace, as well as a latrine.  This would have been living accommodation for the lord.