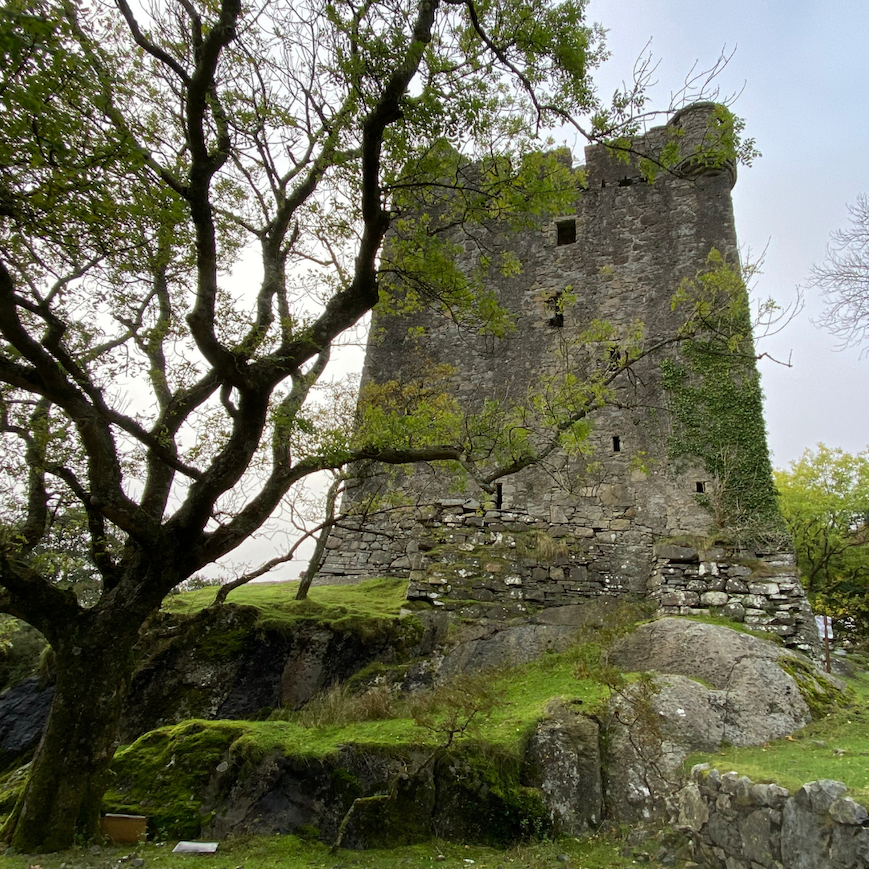 A low fog was rolling in from the sea.  I pulled my raincoat closed and flipped the hood up over my head as the rain became more insistent.  It is only a seven-minute walk to Moy Castle, from where I had parked my car, but I knew I’d be soaked in minutes if I didn’t have the raincoat (it does help to be prepared 😉).

Walking over the rocky shore, the Castle became visible through the fog.  It is not much more than a single tower, but it looks very dramatic in these weather conditions.

The Unruly Maclaines of Lochbuie

The 4th Chief of Clan Maclean of Duart (a nearby castle) was John Dubh Maclean, and he had two sons. Lachlan Lubanach Maclean succeeded his father as Chief.  His brother Hector was, however, considered to be a bit “unruly.”  The brothers did not get on, and Hector decided to create a new Clan branch – the MacLaines of Lochbuie.

He acquired lands from the MacDonalds, along the seashore of Lochbuie, not far from his brother’s Castle. Around 1450 Hector built Moy Castle, overlooking the beautiful seashore.

Construction of May Castle, Isle of Mull

Moy Castle is a three-storey tower with a garret.  The structure is mainly constructed from schistose slabs quarried from nearby Laggan.  Harled stone and beach boulders were also used, and it is all held together with lime mortar. 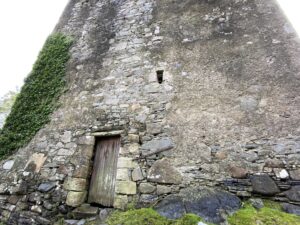 The entrance to Moy Castle

Sadly, the Castle is too unsafe to enter, so I couldn’t explore it internally.  From research and conversations with locals, I managed to find out quite a bit about the internal layout of Moy Castle.  Apparently, the ground floor of the tower has a well cut from solid rock, supplying fresh water to the Castle.

The first floor has a barrel-vaulted chamber which served as the main hall, complete with a dais at the Northeast side.  A garderobe and latrine chute is still extant on the Southwest wall.  The Castle also has a pit prison, only accessible from the hall.  The pit prison is around 3.3 meters deep and only 1.2 meters square – not a place you would want to be locked in!

Spiral stone stairs lead to a small apartment, formed within the thickness of the wall, perhaps intended as a bed-chamber.

Iain the Toothless, however, did impregnate the ugly woman before he was murdered.  The now-pregnant woman managed to escape and later produced a son named Murdoch the Stunted.

Murdoch the Stunted later managed to regain the property for his family.

By 1752, Moy castle was abandoned.  The Maclaines sold the property in the 20th century, and the Corbett family currently owns it.