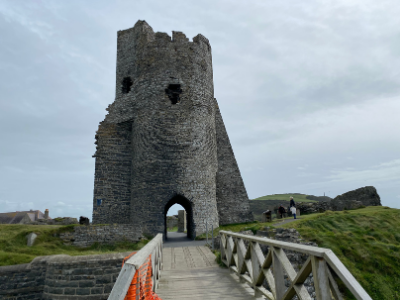 Windswept and abandoned.  Almost lonely with only the sea its lifelong companion – and greatest enemy.  For it is precisely Aberystwyth Castle’s location right on the seaside, which had such a massive impact on its condition.

We arrived around mid-day and found a parking spot close-by.  Walking up the steep pathway, the wind felt ferocious.  And then we reached the castle – or what is still extant of it.  The high gatehouse loomed ahead with various bits of ruins seemingly randomly strewn about to the right.  The sea below looked angry and I pulled my raincoat a bit tighter before venturing among the ruins.

Already in 1110, a motte and bailey castle was built in the area – 1 mile South of the current site.  Marcher lord Gilbert de Clare clearly thought the area needed protection.  In 1116, Gruffydd ap Rhys (King of Deheubarth) laid siege to the castle but this proved unsuccessful.  In 1136, he tried again, and this time succeeded, burning the castle to the ground.  Attempts were made to rebuild but the continuing conflict in the area finally resulted in the castle being razed by Llywelyn ap Gruffydd in 1221.

In 1277, Edward I of England built a new castle (on the current site) after the first war against Llywelyn the Great’s grandson.  Conflict however raged on but so did building works.  Master mason James of St George completed building works in 1289.   Aberystwyth Castle’s Inner Ward was built in a diamond-shaped concentric style, with a twin D-shaped Gatehouse, Keep and Mural Towers at each corner.  The Outer Ward had a Gatehouse, Barbican and thick Curtain Walls.

Sadly, already in 1343, the Castle was falling in disrepair.  It was reported then that the King’s Hall, Kitchen Range and main gateway were falling down.

In 1404, Owain Glyndwr captured the Castle but it was retaken by the English only four years later.  In 1637, King Charles I turned the Castle into a Royal Mint where silver shillings were coined but this closed down during the Civil War.

Sadly, in 1649, Aberystwyth Castle was slighted by Oliver Cromwell’s men.

The Castle and grounds are now part of a park, created by the local Council.  It is open to the public and free to enter and explore.