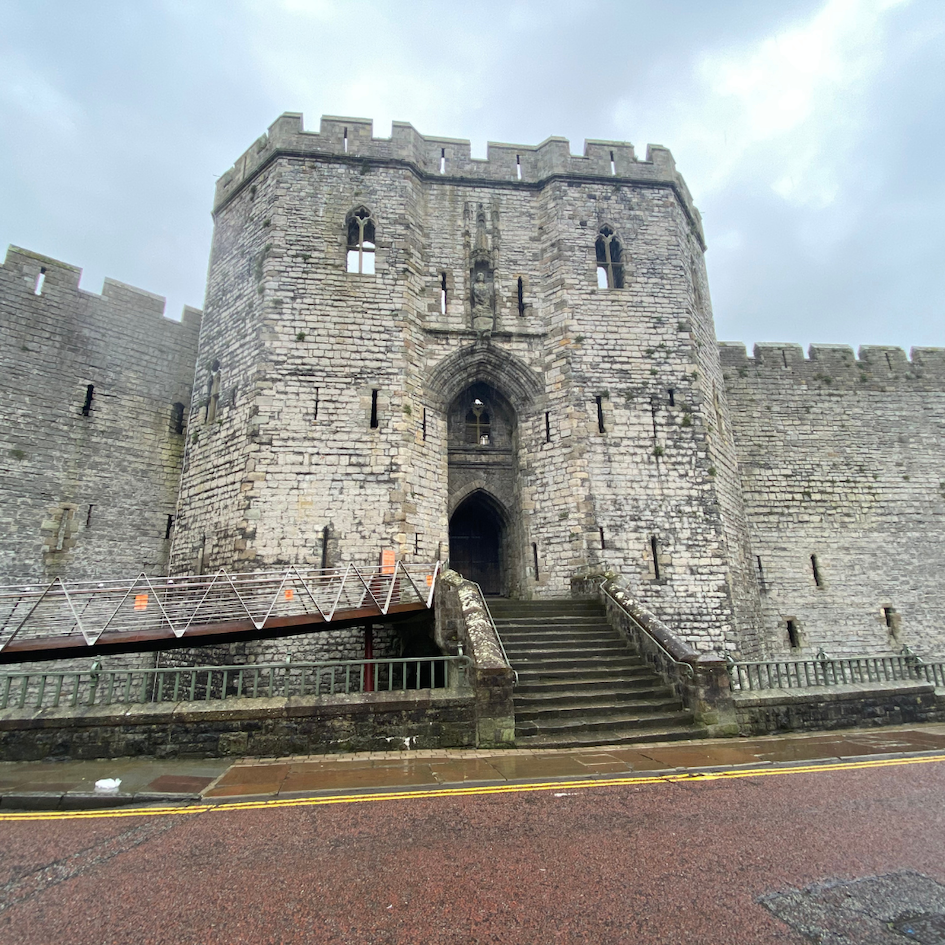 We were two hours early for our scheduled visit to Caernarfon Castle in Wales.  And it was raining heavily.  We purposefully left the hotel where we were staying early, as I wasn’t quite sure how to get to the Castle or what the situation with parking would be like.  And, of course, we needed time for breakfast.  😉

Parking turned out to be easy – there is a massive carpark right next to Caernarfon Castle.  And a short run up the hill in the rain brought us to a little café opposite the Castle.  Here we found a dry place to have a hearty breakfast and coffee before starting our exploration of the Castle.

Towering above us was the formidable King’s Gate.  I pity the medieval soldier who had to fight his way in here!  Even though the Gatehouse was never entirely completed, it would still have taken a herculean effort to breach the Gate. 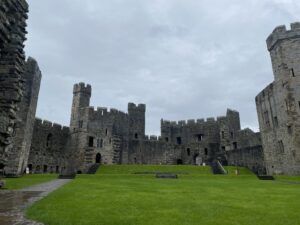 Stepping into the Castle, the layout becomes clear.  To the left is the Upper Ward, and to the right lies the Lower Ward.  Directly opposite the King’s Gate is another massive tower – The Chamberlain Tower.

The first tower we explored is the Granary Tower, immediately East of the King’s Gate.  It is interesting to note the multiple grouping of arrowloops at two levels in the curtain wall of either side of the Granary Tower.  The firepower, which these loops enabled to be brought to bear on a limited front, must – by medieval standards – have been devastating.

The next tower – The North-East Tower – only has two storeys.  In this tower, we watched a documentary about the Princes of Wales.  The other Towers in the Upper Ward are the Watch Tower, Queen’s Gate, Cistern Tower, and the Black Tower.  In the Lower Ward are the Queen’s Tower, Eagle Tower, and the Well Tower.  In the Lower Ward, one can also see the foundations of the Great Hall.  This was a massive room – 100 feet long – where feasts were held in the Middle Ages.

Unlike many Castles in Wales, Caernarfon Castle is still largely intact.  The Towers and walls still stand to their original height, and most roofs are still there.  Buildings in the Upper and Lower Wards have mostly fallen to ruin, but the foundations are still there, so it is easy to imagine how the Castle looked in its heyday.

The area around Caernarfon has been inhabited for centuries.  A Roman fortification called Segontium was built nearby and then abandoned in the year 394.  As virtually no records survive, not much is known about the town and its inhabitants between the time the Romans left and the Normans’ arrival.

After the Norman Conquest in 1066, the new rulers in England very quickly turned their attention to Wales.  By 1073, a certain Robert (a relative of Hugh of Avranches) had built a Castle at Rhuddlan (40 miles from Caernarfon).  He quickly dominated the entire Northern coastline all the way to the river Conwy, and by 1086 he was granted nominal lieutenancy over the whole of North Wales. 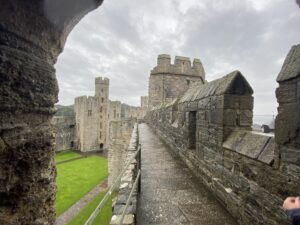 By 1093, several more Norman Castles have strung up in the area, including at Caernarfon.  This first Norman Castle was of the motte-and-bailey type, with steep earthen banks and heavy timber palisading.  There may also have been a timber tower in this early Castle.

In 1115, the Welsh princes recovered Gwynedd and set up a Royal Court at Caernarfon.  It is quite possible that the Welsh undertook further building work at Caernarfon – possibly even in stone – but this is not certain.

We do know that Llywelyn the Great (d. 1240) was known to have resided at Caernarfon on several occasions.  Llywelyn the Last (d. 1282) also stayed here in the latter part of the 13th century.

In March 1282, war broke out between Llywelyn, Prince of Wales, and Edward I of England for the second time.  This time, the English came in full force, and in December, Llywelyn was killed near Builth.  The English stormed onwards, and by 18 January the following year, they captured Dolwyddelan Castle.  This opened the road to the Conwy valley, the Llanberis Pass, and the Vale of Ffestiniog to Conwy, Caernarfon, and Harlech.

On 14 March 1283, King Edward I arrived at Conwy.  He immediately ordered the construction of a Castle there.

By May that year, the English captured Dolbadarn.  This denied Dafydd (Llywelyn’s brother) his last stronghold.  At this point, Edward I ordered the building of Castles at both Harlech and Caernarfon.

Master James of St George was appointed to oversee the construction of Caernarfon Castle.  The first record of works dates to 24 June 1283, when a new castle ditch was started.  This ditch was to separate the new Castle from the houses to the North.  A barricade was then erected along the trench to protect the building site. 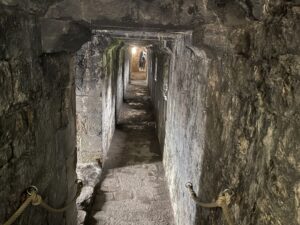 Edward I’s focus was entirely on having a castle in Caernarfon that will be a showpiece of his might and dominance.  To achieve this, even houses were demolished to make way for the new Castle – compensation only being paid three years later! Hundreds of workers were brought from all over England, supplies were shipped in from Conwy and Liverpool, and vast amounts of money were made available for the building of Caernarfon Castle.

It is believed that Eagle Tower was the first part of the Castle to be built.  When Edward I and Queen Eleanor visited the site for the second time – this time for their son to be born at Caernarfon (25 April 1284) – legend has it that the birth took place in Eagle Tower. Indeed, by this time, the Castle was taking shape, and by the end of 1285, the town walls were also completed.

Building works continued until 1288, by which time £12 000 has been spent.  After this date, records show very little expenditure, indicating works have mostly come to an end.  At this point, the Southern and Eastern parts of the Castle were generally complete (between Eagle Tower and the North-East Tower)

It is worth noting that the Castle already provided robust protection, even though it was not completed at this point.  The Northern part, which has yet to be built, was protected by the town and town walls.  Caernarfon Castle was safe and strong – or so the English thought.

Totally unexpectedly (for the English), the Welsh rose in widespread Revolt in 1294.  A new leader, Madog ap Llywelyn, assumed the title of “Prince of Wales” and lead his people in the onslaught of Caernarfon.  The town was overrun, the sheriff assassinated, and massive damage was inflicted on the town walls.  Of course, once the Welsh breached the town walls, there was very little stopping them from entering the Castle – the Northside was as yet uncompleted.   Once inside the Castle, the attackers burned everything in sight.

Edward I was furious.  His response was like a hammer blow.  An army was dispatched and promptly recovered all ground lost during the Revolt – including Caernarfon Castle.

And the King wasted no time in ordering further building work at the Castle.  First on the list was the repairs to the town walls – costing £1195.  Next, the Castle had to be repaired.  The Welsh had destroyed a great deal, so the task at hand was not cheap or easy.

Work now started on the Northern side of the Castle.  Between July 1295 and the end of 1301, almost £4500 was spent on building works at Caernarfon Castle.  Strong defence was definitely top of mind, as the arrowloop groupings at the Granary Tower (mentioned earlier) show.

Work continued unabated until 1301 when there is a gap in the accounts until 1304.  This may be due to the War in Scotland, which would have needed funds and men – diverted from castle building.

Work resumed in late 1304, and a further £700 was spent on Caernarfon Castle’s building over the next two years.  We know that building works continued until 1330 but at a much slower pace.  What we can still see today dates mainly from this period.

Caernarfon Castle was maintained for some time after the initial building works were completed, but, as is the case with most castles, neglect led to slow decay.  By 1620, only the Eagle Tower and King’s Gate were still roofed.  Timber, iron, and glass have been carried away over time, and the interior buildings were starting to fall down.

The Castle was garrisoned during the Civil War (1642 – 1648) and did face three sieges, so it was even then still in formidable shape.  In 1660, the government ordered the Castle to be demolished and its parts sold to raise money for the county.  Thankfully, this order was never carried out.

The town of Caernarfon saw a significant influx of inhabitants and a general era of prosperity during the 1820s when a railway was constructed and the slate industry took off.  It was at this time that a programme of repairs was started at Caernarfon Castle.

In 1986, Caernarfon Castle was inscribed, along with the town walls, on the World Heritage List as a historic site of outstanding universal value.

What Not to Miss at Caernarfon Castle