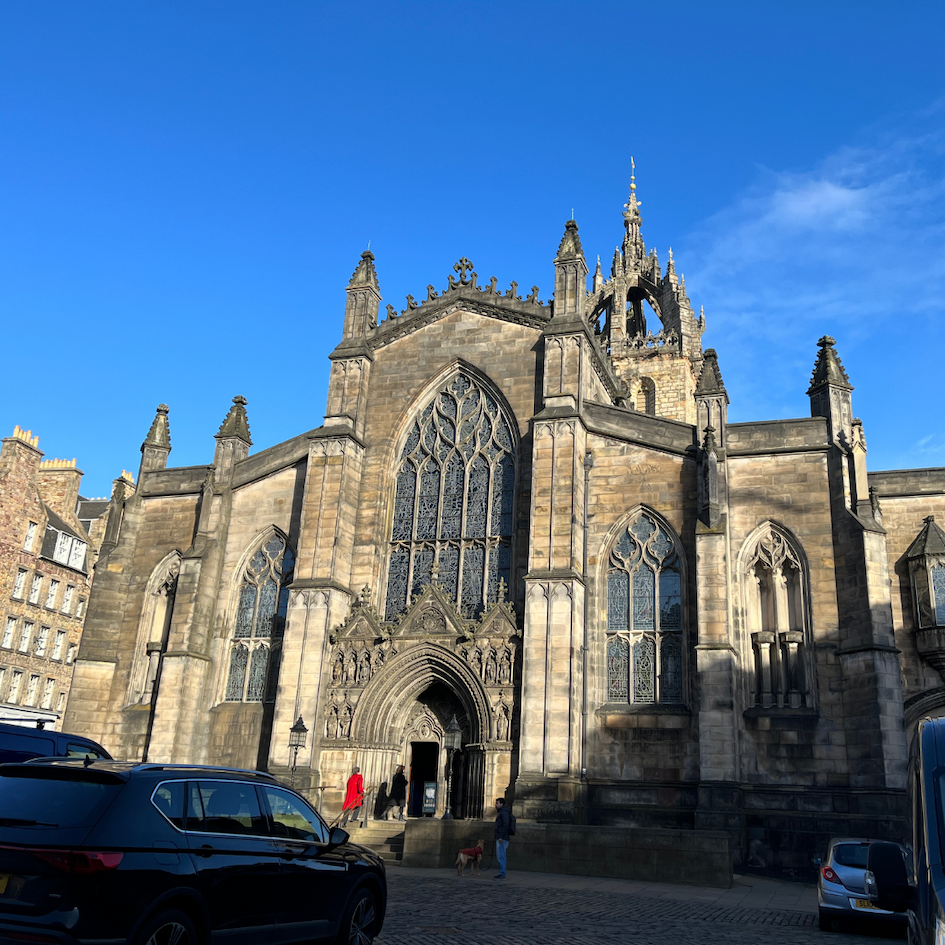 From a Leper Hospital to violent riots to today’s popular visitor attraction, St Giles’ Cathedral on Edinburgh’s Royal Mile covers it all.  Steeped in rich history and magnificent architecture, St Giles’ is a must-see for every heritage tourist.

It is believed that the site where St Giles is located was once used by the monks of the Order of St Lazarus, who ministered among lepers.  Saint Giles is, of course, the patron saint of lepers, so this may be the reason for the church’s dedication.  Another school of thought on this matter follows that the dedication is connected to Matilda, who founded St Giles in the Fields and who was the sister of King David I of Scotland.

Either way, when King David I founded a church on the site in 1124, it was dedicated to St Giles.

St Giles’ was consecrated by David de Bernham, Bishop of St Andrews, on 6 October 1243.  As St Giles’ is attested almost a century earlier, this was likely a re-consecration to correct the loss of any record of the original consecration.

In 1320, the Scots signed the Declaration of Arbroath – a letter to the Pope affirming Scotland’s independence from England.  The English didn’t take kindly to this development, so Edward II of England sent an army to Edinburgh.  They burnt most of the town to the ground and St Giles’ suffered severe fire damage.

St Giles’ again played a leading role in Scottish matters when, in 1384, a secret meeting between Scotland and France took place in the church.  They developed a plan to raid England.  King Richard II of England retaliated and sent an army North to burn St Giles’, along with several other churches.  By 1390 though, the church was fully restored again.

In the early 15th century, Edinburgh’s town authorities wanted St Giles’ to become a collegiate church.  This prestigious status could only be granted by the Pope.  The first petition was sent to the Pope in 1419 but was unsuccessful.  The Scots didn’t give up, though.  In 1423, they sent a second petition but were again denied.  On the third attempt, in 1466, Pope Paul II finally granted collegiate status to St Giles’.

In 1633, Charles I made St Giles’ the cathedral of the newly created Diocese of Edinburgh.

Riots and Troubles at St Giles’

In 1558 Protestantism was beginning to take hold in Scotland.  One night a statue of St Giles was stolen from the church, which was still Catholic in practice, and thrown into Edinburgh’s Nor’ Loch, a putrid body of water which once filled Princes Street Gardens.  The traditional St Giles’ Day parade was also interrupted by Protestants trying to break images of saints. 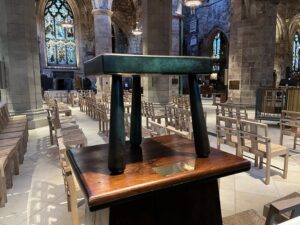 The following year, John Knox (a prominent Protestant) marched an army of followers into St Giles’ and started preaching. Support for him and his beliefs was so great that he was elected St Giles’ minister the very next week.  At this point, the church was stripped of its Catholic decoration.

Even though Scotland, at that time, still had a Catholic Queen in Mary Queen of Scots, the Scottish Parliament abolished papal authority in 1560 and declared the country as a Protestant country.  At this point in time, after 400 years as a Catholic church, St Giles’ officially changed to a Protestant Church.  This brought severe destruction, with the stained glass removed and the church silver melted down.

Again in 1637, there was a riot at St Giles’.  St Giles’ has now functioned as a Presbyterian church for several generations.  King Charles I (king of both England and Scotland) wanted to bring Scotland in line with the English religion, which was Anglican.  He attempted to force the congregation at St Giles’ to use a new prayer book.  This was just too much for the locals!  One woman, Jenny Geddes, picked up her stool and threw it at the preacher.  This act set off the rest of the congregation, and a total riot broke out.  Services had to be suspended for a week for fear of further uprisings. 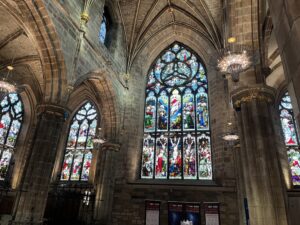 By 1745, the Jacobite cause started to gather momentum in Scotland.  Again, St Giles’ played a role in proceedings.  When Bonnie Prince Charlie arrived in Edinburgh, the Magistrates of Edinburgh gathered at the church to receive his message commanding them to surrender the city.  From here, he travelled down the Royal Mile to set up court at Holyrood Palace.

By the late 19th century, St Giles’ was in a sorry state of disrepair.  There was still visible fire damage from the 1385 English raid!  The Lord Provost of Edinburgh, William Chambers, envisioned a revitalised and refurbished church.  In 1872, he and his workers set to work to repair and renovate the old church.  Pillars were cleaned, walls plastered, and the floors were redone with new decorative tiles.

In 1911, the Thistle Chapel was constructed inside St Giles’ Cathedral.  This is where members of the Knights of the Thistle meet on an annual basis.

What Not to Miss at St Giles’

St Giles’ is a rather large building with lots to explore and experience.  A proper tour will probably take upwards of two hours, but if you are pressed for time, at least have a look at these not-to-miss parts of the church.